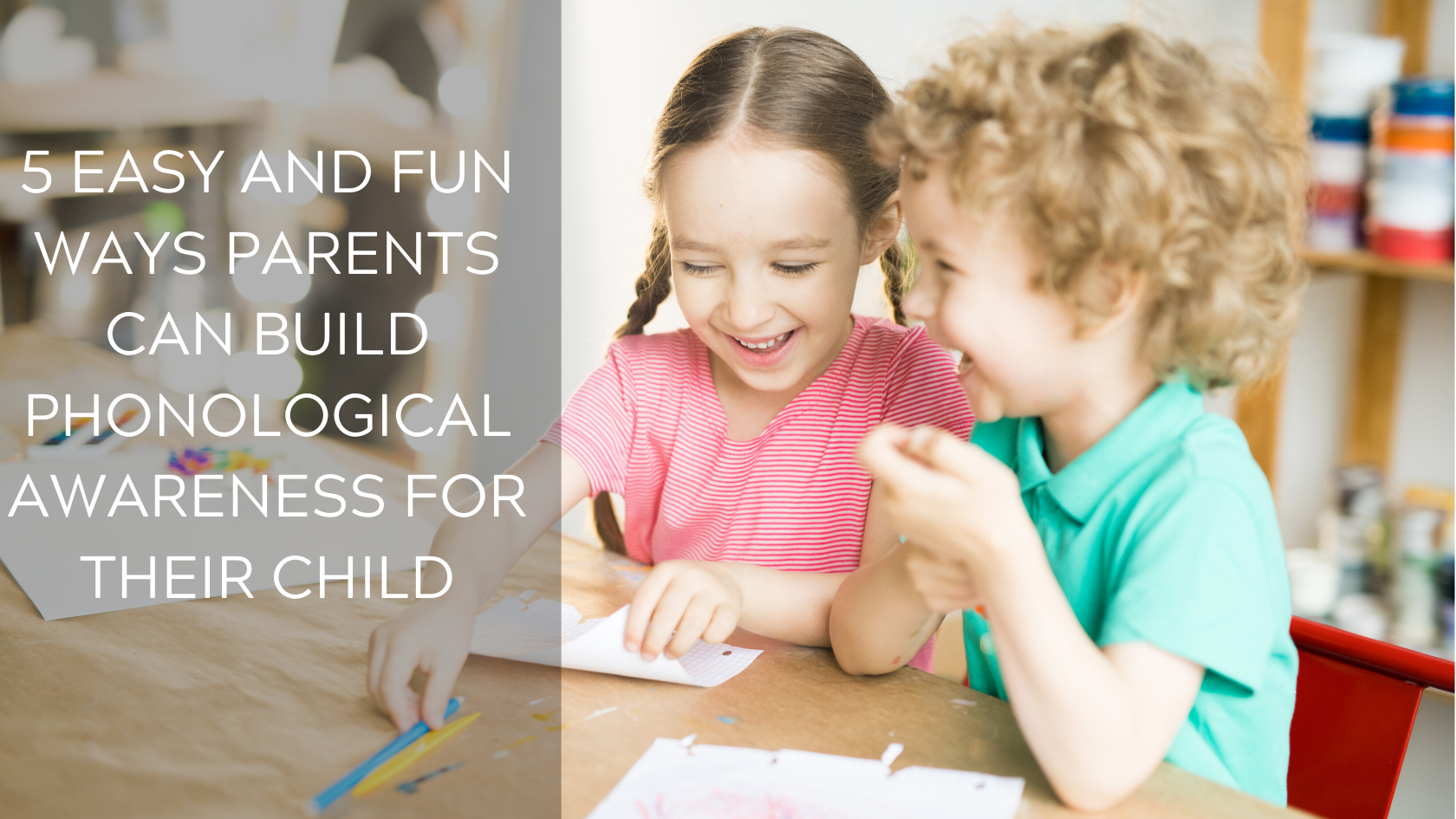 Is Phonological Awareness for parents or for schools to worry about?

I will show you why it’s important for parents to think about Phonological Awareness as well as teachers. I’ll also give you lots of easy and fun ideas for ways that you can support and build this crucial skill with your child.

What is the difference between ‘Phonics’ and ‘Phonological Awareness’… and why should you care?

PHONICS is about mapping speech sounds to letters. This is often the first thing we think about when we want to start teaching our child to read and write- drilling them in the ABCs until they know it inside out will sort that, right?

It is important to know the names of the letters, and even better to know the sound the letter actually makes, but there is still so much more that children must develop to have the skills they need for literacy.

PHONOLOGICAL AWARENESS is a broad term for the skills that are required to understand and be able to manipulate the sound patterns of language.

Some of the specific skills include:

Phonological Awareness has been well documented as one of the most powerful predictors of early literacy.

A study by Carson et al shows that just a short amount of phonological awareness intervention in the classroom has a positive impact on young children (both for children with and without a language disorder).

The children in this study were five years old. They received 10 weeks of input in school which involved four 30-minute sessions each week which focused specifically on phonological awareness skills and were delivered by the classroom teacher.

At the end of the ten weeks, these children showed improvements in phonological awareness, and in both reading and spelling measures compared to the control group. And this advantage was maintained until the end of the school year (3-6 months).

In other words, improving the children’s Phonological Awareness improved their overall achievement in literacy.

But the teachers are covering it, right?

Although this study highlighted the benefits of working directly on Phonological Awareness at school, this is not something we can take for granted that every school does, or if they do, that it is being done well.

Dr Jane Carroll, tested the phonological awareness skills of 699 education professionals and paraprofessionals working in primary schools and early childhood centers. There was a large amount of variability in the results, and she stated that overall teachers demonstrated limited knowledge of phonological awareness, although they self-evaluated their knowledge positively.

Maybe this means that Phonological Awareness is something for parents to take more ownership of!

The question of when to start thinking about this topic was also a major question from Dr Jane Carroll’s studies, as she points out that a child’s phonological awareness ability at school entry can reliably predict their early literacy success.

This shows that Phonological Awareness is something for us as parents to think about long before our child’s first day of school.

A Shortfall in the System

Carroll finished up her article by stating the need for professional development in the area of phonological awareness for both early childhood and school teachers to enhance children’s early literacy development.

So, this research is telling us that:

Don’t panic- you have power as a parent!

As parents, we are willing to go above and beyond for our children. We’ll happily reinforce the learning from school in any way we can. And while we work in partnership with teachers to practise reading, and even phonics (What letter is that? What sound does it make?), a very small percentage of parents are taught what phonological awareness is, or given any tips and suggestions on how to teach their child this valuable skill.

And as a parent, you are a crucial educator for your child. Through their life, you have given them learning opportunities and modeled language.

With these top tips and games, you don’t have to cross your fingers and hope that your pre-schooler or schoolchild is picking up the foundation skills that they need for literacy, or hope that it’s somewhere on the teaching team’s agenda- YOU can proactively develop Phonological Awareness in your awesome role as a parent… and watch the benefits in your child’s reading achievement.

Does reading ability really matter that much?

Maybe you’ve been reading this thinking, ‘it’s good to know, but my child’s better at other subjects. Reading isn’t their interest.’

In early years, the focus is on ‘learning to read’. But as the years pass, the focus very quickly switches to ‘reading to learn.’ Pretty soon, reading is being used in every single area of the curriculum as a platform for learning. Almost every subject area becomes highly dependent on reading. This increases the further through school your child progresses. Think of those heavy science textbooks and all the complicated language inside!

Children are increasingly expected to become more independent in their learning- to read to learn. This is in more than just English, it’s across subjects! Strong literacy skills are needed also for every exam with a written component.

Hopefully this post convinces you of the far-reaching impact of strong literacy skills through all of education.

Phonological Awareness for parents is a lot of fun, and more importantly, the benefits for your child are so worth it!