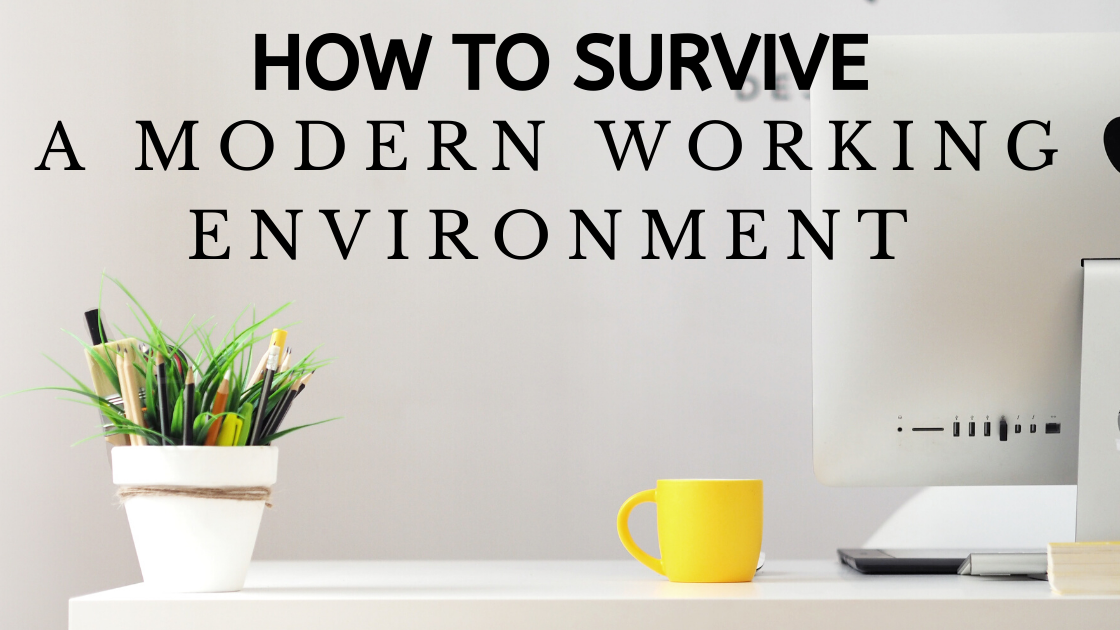 How to Survive a Modern Working Environment

I still think longingly of my little desk by the window. The desk with my personal pictures inspiring me to do my best work; the pot plants to relax me and remind me of the great outdoors; and the well-organised folders and containers, enabling me to do my work efficiently and with minimal stress. Sadly, all good things must come to an end, and the lease was up in our cozy building by the sea. We’d be moving to a shiny new one that would be totally modern. Read on for my hard earned top tips on how to survive a modern working environment!

In our ‘Modern Working Environment’ we would implement ‘hot desking’, there would be ‘flexible working spaces’ and we would launch a ‘war on paper.’ The new building would be sleek, shiny, and distraction free, maintained with the ‘Clear Desk Policy’ which would be policed on a daily basis.

This vocabulary was brand new to me, but gave me an uneasy feeling in my stomach all the same. I knew that serious change was coming.

Strict instructions were given in preparation for the BIG MOVE:

– Scan or shred every single piece of paper that you own
– Centralize and downsize resources- there would be a small amount of team storage and a laughable amount of personal storage
– Get rid of all the pot plants!

It didn’t take me long in the new building to learn three hard lessons about a Modern Working Environment.

1. Hot-desking favors the brave, not the nice

OK, I’ll admit it- in school I erred on the side of caution and I did what I was told. And… I’ll admit it, nothing much has changed.

So, when we arrived at our new office, and the boss emphasized that we must hot-desk (which involved clearing everything off the desk at the end of every single day), I honestly tried.

Unfortunately for me, others were much braver and could see exactly how the situation would unfold. With this knowledge in mind, they confidently staked their claims at the best desks, leaving personal items strewn around every night so no one arriving early the next day would dare to sit there.

In contrast, my daily routine on arrival was to spend a solid ten minutes wandering pathetically, belongings clutched to my chest, past the 90% of desks that by now were very obviously taken (mugs and piles of paperwork proudly displayed). I’d finally settle at whatever desk had been rejected by the others.

And, one month in, when my boss returned to the same desk every day for a week and finally left it set up, I knew I had played my cards badly- very badly.

A gloriously unexpected second chance arose when the best desk in the whole office became vacant. I parked myself there for a whole week, apologetically leaving out my things each night. But by the end of the week, guilt had crept in to whisper in my ear- why did I deserve the best desk? Didn’t we have a policy?? And so, I packed up my things, feeling that it was at least sporting to give others a chance, but of course I’d come back on Monday if it was still free.

At the break of day on Monday, the desk was claimed, as I’d known it would be. She has been there ever since and she brazenly leaves her things stacked high on that desk- every single night and every single weekend, without a care in the world. Oh to be so confident.

So how did I survive my modern working environment? I found a desk that was bearable but without the high competition, and settled in for the year ahead. And for you? Have a look at Corporate Nomad’s top tips for hot-desking. And learn from my mistakes!

New Zealand, being on a fault line, has a much higher chance of earthquakes than other parts of the world.

In the days before the ‘Modern Working Environment’, these were stored under our desks to sustain us after all the ‘Dropping, Covering, and Holding’ that had gone on in the throes of the event, and while we waited to be rescued from the crumbling ruins of the building.

Where did these these survival packs fit in our new way of working? We (technically) no longer had our own desks, we had gotten rid of most of our storage spaces, and our personal storage consisted of a tiny locker- about 2 feet high and 1 across (this did actually force me to drastically improve my computer storage system for which I’m grateful).

Management’s answer to this conundrum was simple and obtuse: this is a modern working environment– do not keep anything under the desk; personal storage has been provided for everything you may need.

The dilemma forced people to examine their true priorities.

In each and every case, the choice was simple.

And so, one by one, people prioritized their belongings, and the pile of survival packs in our little storage cupboard down the corridor grew by the day.

We learned to survive in a modern working environment. We could only hope that, in the unfortunate event of a natural disaster, someone remembered the storage pin code!

3. Greenery is an office-place danger

As a Speech and Language Therapist I am reasonably familiar with diseases affecting the lungs.

I had never heard of one lung disease in particular, although it became a daily conversation in our office.

That is, Legionnaires’ Disease, a severe form of pneumonia caused by infection.

You catch Legionnaires’ Disease by inhaling bacteria. The most common are:

In the eyes of the establishment, this was enough grounds to impose an office-wide ban on all greenery of any kind. Goodbye, pot plants!

Plants, to me, are pleasant clutter. They are homely, and they provide a little positive distraction, reminding us of the world outside the office.

Sadly, they are not shiny and sleek, and don’t fit into the ‘clean lines’ of our new office. They do not fit into a modern working world. And if only the people making these decisions would just say so.

The war on greenery was what irked people more than anything else. To survive a modern working environment, consider your stance on this highly divisive issue before making the move to a new way of working!

The perks of a Modern Working Environment

Moving away from assigned seating was admittedly a huge relief. I work with some amazing people. I also work with some very chatty people!! Hot desking allowed me to choose who I sit beside, whether I want a quiet corner or to be in the midst of the bustle, and it has skyrocketed my efficiency!

A few years ago, I experienced extreme micro-management in seating arrangements (from a temporary manager drafted in for six months!) She clicked into the the office in high heels and immediately shuffled the team around, telling us somberly that ‘great thought had gone into the seating position of every single person’ (many of whom were twice her age). It felt a lot like being back at school when the teacher separated you from your best friend.

So, all up, maybe a Modern Working Environment isn’t so bad after all!

I must admit that I still think about the familiar comforts of my old office quite often. Have you experienced a Modern Working Environment? What advice can you share? Comment and let me know your thoughts. I’d love to hear what you think!

How to Survive a Modern Working Environment

6 thoughts on “How to Survive a Modern Working Environment”